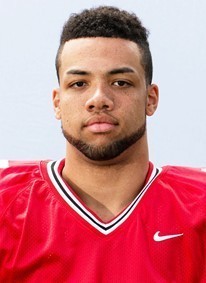 In High School every Sunday during the season some of our teammates would hold a camp for mentally challenged kids in our area and teach them about the game through drills and flag football games. It was really fun and an awesome feeling to put smiles on the kids faces.

My parents because growing up they would stop at nothing to give me everything and raise me to be the man that I am today. They gave me my work ethic on and off the field.

I played Basketball and ran track up until college.

I played Tight End in some packages we had this year. I also played Free Safety in High School.

My physicality and my route running. I am a big body but I also take pride in running precise routes which I feel many receivers lack at my size. A defensive back may sometimes be faster but my ability to deceive the defender is how I will beat them.

I look at the drops of the defenders and their pre-snap alignment to see what coverage they like to play.

I don’t remember a specific defender but I would say the Slippery Rock secondary. The past two years they were a very sound group that was well coached and had good discipline with their technique.

I would say a mix of Alshon Jeffery and Larry Fitzgerald. They both are a big physical receivers who run crisp routes and when the ball is in the air, they will come down with it. I watch their highlights and try to emulate what they do.

In the beginning of my high school and college career, I was very underrated and wasn’t looked at as a premier receiver partly due to the fact that I don’t have 4.4 speed. So I had to constantly prove myself in practices and games to show that I am a player and can be productive regardless. I’ve worked and am continuing to work on my speed and have seen the progress.

I have a pregame playlist of songs that I listen to before every game in the locker room. I jump around a little bit to get relaxed but also zoned in.

Not going against Division 1 defensive backs can be looked at as an obstacle but I believe that as the competition gets better, my game and level of play increases as well. I play with a fearless attitude that no one lined up across from me should be able to stop me. The speed of the game can mentally be hard to get used to but I feel like I mentally play faster than the game goes.

I make plays. I believe I will make plays against anyone and if I’m faced with adversity, my work ethic will be the overcoming factor because I will work harder than the guy I am against.

I am a die hard Philadelphia Eagles fan and my favorite player was Brian Dawkins.