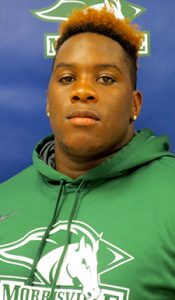 Fahraad Johnson is an All American at Morrisville State and the kid is not a little guy. He looks the part

At a local elementary school we were apart of a program called PARP and during breakfast and lunch periods we read books to the kids, did finger paintings and other art projects with kids. it was cool to see those kids smile and hear them say how happy we made them after every visit.

My dad is my role model because growing up he taught me the essentials of hard work and how to become a man at a young age i owe my drive and dedication to him.

I think my length separates me from others at my position having long arms gives me an advantage when it comes to throwing a well timed punch.

When breaking down film I look for defensive tendencies not only the defensive line but linebackers and safeties as well to see what’s going to happen up from whether there is a blitz coming and things like that.

Being away from my older brother when he was diagnosed with cancer, I overcame it by spending a lot of time with my teammates while i was at school and surrounded myself with positive people that helped me through this tough time.

I have two Gatorade’s one red and one blue, I have to listen to the Watch the Throne album by Jay Z and Kanye West, and get stretched by our trainers

Coming from a small school we don’t get as much exposure as the bigger schools so people don’t really know what we are capable of and the way that we can compete.

My knowledge of the game.

I am a student of the game, I’m going to put every once of what I have to make myself a better player. I’ll give and do whatever it takes to get to the type of player that his organization wants me to be the ceiling is high for me and my game on and off the field.

The Eagles were my favorite player growing up they had in my eyes the best players at their position on their team at that time. They had Donovan McNabb who was a dual threat with his legs and could sling the pigskin, Terrell Owens who made big plays at will whenever he wanted to, Brian Westbrook who was a beast and then on defense Brian Dawkins who laid the wood on WR and Slots coming across the middle of the field.

My Older Brother, Any NFL GM and Mom

My parents a big house because since day one in my football career they always told me that sky is the limit.