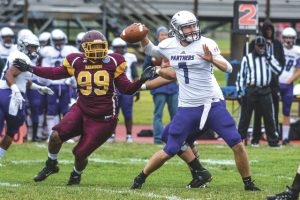 This is a tough question because we did many things as a team to give back. One of my favorite stories will always be whenever the head coach, some teammates, and I did the polar plunge. That is where you jump into  a lake in February when it is freezing cold as a fundraiser for the Special Olympics. We let our head coach go first to test the waters and whenever he jumped in it was so cold that he locked up. As soon as he emerged you could just tell by the look on his face that he was pretty much stuck. So the other players and I had to jump in and swim him back to the bank. I give him a hard time about that all the time. It is also special when we go talk to the local elementary schools about how important their education is. Its really meaningful to see how they look up to guys like us and helps keep me motivated.

I would say the hardest class I ever had to take has got to be engineering. I like the math and being hands on, but the technology used in that class was way over my head.  And my older sister is getting her PhD in engineering so the only thing that kept me motivated in that class was to prevent her from talking smack to me.

I’m from a small town in Muhlenberg County, Kentucky

I know it is cheesy but my role models would have to be my family. Although neither of them played sports in school they still set examples for me on hoe to be a great teammate, how to handle leadership roles, and how to always be humble and thank God for the many blessing he has given me. I had many other people I my life that I would look up to in various situations. If there was an athlete I looked up to growing up it would have to be former UK basketball player Patrick Sparks. He came from the same small town I am from and made it clear that dreams can become reality with hard work. No matter where you are from.

I grew up playing basketball and baseball but I was always involved and doing something. I also was on the swim team and tennis team for a year in high school. Whenever it isn’t football season I will play pick up basketball and slow pitch softball. I also attempt to golf but I haven’t gotten that figured out yet.

In high school I played DB, Punter/ Long Snapper, and I also played some WR. 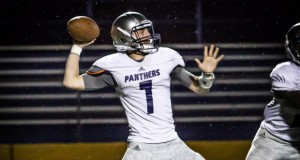 I like to first analyze our offense, whether is was is games from previous games or practices from during the week, to see what we are getting good and what we need work on. I also look to see how teams successfully defend us to help improve game plans to attack all defenses. Also so I can see what my guys are thinking on their adjustments and help with chemistry. Then I like to look at defensive tendencies of the opponents to see how we can attack their weaknesses.

I’ve played so much football it is difficult to say who the toughest player I ever faced was but the player that first comes to mind would have to be Corey Robinson from Loan Oak High School. He was the opposing QB in the first round of playoffs my Freshmen year of high school. He was a senior and was unstoppable all year finishing the season with something like 94 TD’s and 6 INT’s which was a national record if I’m not mistaken. He went on to play quarterback at University of Troy.

I don’t really like this question because every quarterback is different in every situation but I would say Matthew Stafford. I think we are similar in the way that we can find mismatches and take advantage of them. I also feel as though I can throw from different arm angles in order to fit a pass into a window. We both have limited mobility but can move around well in the pocket and get a couple of yards if everything breaks down.

The biggest obstacle in my life was losing my older brother sophomore year of high school. The time after his death was a hard time for me and my family. The pain from the loss of my brother combined with seeing my family in agony really motivated me. I had a hole in my heart from the loss, that is when I fell in love with the game of football. When I was in between the lines, nothing bothered me. It was all ball. Whenever I was uninspired or had a bad attitude, I would go back to seeing how sad my family was. The only thing I wanted was to make them proud. And I learned not that life is short and to make the most of it no matter the circumstances.

I don’t have to many rituals. I just try to eat a light breakfast, get a hot shower, and watch a little game film. I get to the field early to get my arm warm and get some touches with my WR’s. One weird ritual for me is listen to the “Last of the Mohicans” soundtrack which is like orchestral war music. That gives me the calm before the storm feeling. And right before we go out for the coin toss, I’ll listen to the most hype rap song to get my blood flowing and ready to play ball.

There were a lot of obstacles that we had to overcome being a small school football team. The one that sticks out there most would be practice times. Due to classes issues there were some practices where we only had 4 offensive starters for a practice. My tenure at KWC we had practice from 9-11 at night one year, the next year we had practice from 5:30-7:30 in the morning, and the years after that we changed it week by week. Being a student athlete was difficult enough but with these drastic hours plus still having to be a student was a major obstacle. It also made it difficult to eat during season with restricted cafeteria hours, combined with class and practice hours.

My teammate and brother Xavier Mitchell also has an interview on this webpage and I read through it and saw where his biggest strength was his ability to fight through adversity. I think that is very fitting for the both of us. We 2 of the 5 guys who stayed through our redshirt year. We reported to camp with 50+ kids in our freshman class. We sat the bench and watched as the team went through a rough couple of years including an 0-11 season. Instead of giving up or transferring to another school, we decided to stay on campus over the summer and winter breaks and become more dedicated. I was the came in as the 6th string QB and didn’t see get into a huddle for 2 years. I was frustrated but I used that as motivation to be better, to be the best.

I have plenty of room for improvement but I believe that my biggest weakness would be calling play at the line of scrimmage. I was successful reading defenses in college but in order to be successful at the next level I need to improve. I believe with improvement with that will come with reps and training.

My father was a coach so I have been around football my entire life. I don’t know a life without football and I’m not willing  to give that up. My love of the game drives me to be successful and I am just starting to blossom. I improved leaps and bounds each year and I can only imagine the improvements I would make under a professional staff.

My dad was always a Titans fan and I went to a couple games growing up so I like to see them do good for him. In all honesty I never really had a favorite team, I would like certain teams each year. I will say that Mike Vick was definitely my favorite madden player growing up, he was unstoppable.

This is  a tough one. Uhhh Peyton Manning so I could pick his brain about the game of football and what it takes to be a great QB at the next level. Stuart Scott would be another person I would like to have dinner with. Whenever I think of sports as a child I still hear his voice coming from the TV. I would also like to have dinner with my brother to tell him how we miss him and to be able to say my final goodbye. I think I’m big enough to take him now too so I could give pay him back for all those times he beat up on me.

With my first paycheck I would probably have to pay off my school loans. Small private school tuition isn’t a joke. But then I would have to buy a house with room enough for my mom to stay too. Because there is no reason to pay for a personal chef whenever I can just have one move in.