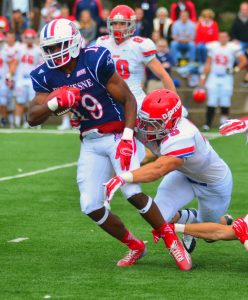 The hardest class I took was a literature course. It was classical literature from the 1800s era and I had no interest which made it difficult.

I was born and raised in Texas. Lived in College Station, TX for 12 years until I moved to Maryland where I live now.

My role model would have to be my father. He’s taught me how to be a responsible man, how to maintain lasting relationships, and I continue to learn from his experiences that he shares with me.

I played a little basketball and ran track.

I played safety in my younger high school years.

I feel like my route running has greatly improved each year, I’m physical at my position, and I don’t shy away from competition.

When I watch film I watch for their tendencies. How their body moves in and out of breaks. I take note of their athleticism, if their stiff or fluid in their movements. I also take note if they’re aggressive or more finesse player.

The toughest competition I’ve came across have been from my teammates in practice everyday.

I try to model my playing style off of Julio Jones because he’s one of my favorite players to watch.

The biggest obstacle of my life was the death of my older brother. Losing a loved one is tough but having a strong family helps to get through hard times. 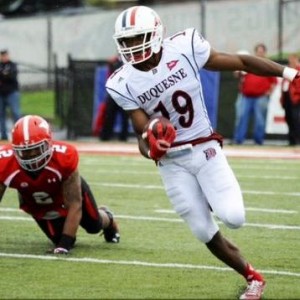 I really don’t have any pre-game rituals. I usually just go to the field earlier than normal to get a feel  of the field and to get warmed up. Nothing out of the ordinary.

My biggest strength is that I’m adept at getting defenders out of position at the top of my routes.

My biggest weakness is that I always wish i was quicker and I hope to improve on that.

If you were a GM I would tell you that my main approach in life is to get better each day, improve on what I did the day before, and that I won’t cause any problems on or off the field.

One of my favorite players to watch growing up was Dante Hall for the KC Chiefs.

If I was to have dinner it would be with my deceased grandmother and brother.

With my first paycheck I would probably buy some new clothes and some good food.