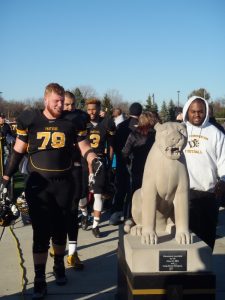 Ohio Dominican offensive lineman Benjamin Copher is a mauler in between the lines. He is a good blocker in both pass and run offense

Giving back- I would have to say the coolest thing I have ever done off of the field would be visiting the veterans memorial hospital near our campus here in Columbus, also cleaning our community here in Teakwood Heights which involved just doing yard work for home owners who couldn’t do it themselves or struggled to get around to yard work.

Where are you from- I am from a small town outside of Dayton Ohio called Germantown, it is actually a village because of its low population.

Role model- My role model would have to be my grandpa Ed, he is one of the hardest working people still in his 60s, if it wasn’t for him, their would have been absolutely no chance I would have made it to where I am right now. He is the one person I have tried to model myself after because he has so many qualities that I feel a good man should have. When I was a senior in high school, our goal was for me to go to college and graduate and be the first person in my family to do so, I knew that would make him proud so their really was no other option in my mind but to succeed. He is hands down my number one role model that I hold higher up than anyone else.

Other sports- I played basketball growing up, and track for a couple years but football was my calling.

What separates you from others- I would say the thing that separates me from others is technique and the will to win. My offensive line coach in high school Bob Skidmore really harped on technique because that’s what wins ball games. Once I got to college my offensive line coach Scott McIntire really preached technique, even at my size playing smaller division football, technique is the number one thing that will get you beat, he understood that and constantly preached technique and turned me from an average football player to a good offensive lineman, he has influenced my game greatly on and off the field. The will to win to me is hating losing more than I like to win, winning is what your suppose to do, I never have really believed in getting a huge pat on the back for doing what you’re suppose to do and that is winning. I feel that every great competitor hates losing so much that it drives them to win and I feel as though I have that quality.

Breaking down film- When I break down film, I look for a lot of tendencies in pass rush technique, what moves a guy may like in how many steps, how many steps does he take in a twist or stunt, does he play to just pad stats or does he play every play like its his last. Looking at defenses as a whole, I look at the safeties, they give some stuff away in their alignment in terms of blitzes and what they are doing for run support and pass coverage.

Toughest player- I think their are three players that really stick out to me that were close to being at the same level but were all three different in their styles. Matt Judon from Grand Valley State, Darius Allen from Colorado State Pueblo, and Jamie Meder from Ashland. All three possessed a crazy amount of talent but each had very different ways to get the job done, all three were elite guys in my opinion.

Comparison to NFL guy- If I could compare myself to one guy which is tough because they are all tremendous athletes, I think it would be similar to Jake Matthews, we carry the same build and same frame in terms of a football player, he is incredibly skilled and that is one guy that I have always looked up to in terms of NFL talent and skill.

Biggest Obstacle- Biggest obstacle I have ever struggle with in life is overcoming patella knee surgery my senior year of high school and having to deal with the rehab and being immobile for a little while. It was frustrating and something that I had never dealt with but it helped me appreciate the ability to play football and workout.

Pre-game rituals- The only pre-game ritual I have is listening to a song from Explosions in the Sky, and putting my left cleat on before my right as silly as that sounds, I have done it since high school

Small school/biggest obstacle- Exposure, we don’t have broadcasted games every Saturday or a huge fan base or huge stadium but we produce great football on a consistent basis. Also, being from a small town, coming to a huge city was a difficult transition but the small school atmosphere he was great from the faculty and other students here at ODU. 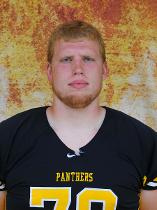 Strength- My biggest strength on the field is my size and strength combined with my technique, off the field I would say coachability/knowledge of the game and being able to adapt to difficult situations presented to me.

Weakness- A weakness on the field is just overall speed and foot speed, those two things can always improve at any position and that is my main focus.

If you were a GM- I am a hard working, leader on and off the field, and have the ability to learn and adapt by using effective communication to learn about different aspects of the game or what needs to be done off the field.

Favorite team or player- Favorite team is hands down the Steelers, and my favorite player is close between James Harrison and Troy Polamalu

First NFL paycheck- I would pay off the college loans that I have, then I would give everyone in my family a set amount of money, then buy a nice car for myself as a present for me, buy a nice house with a decent amount of land, and finally get married to my beautiful girlfriend