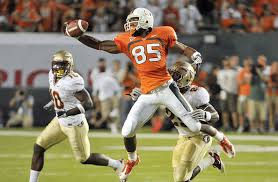 Patriots have now released Leonard Hankerson, this is the second time in less than a month

Leonard Hankerson cannot be 100 percent healthy. Either that or the guy has really fallen off, because he has now been cut twice in one month. According to Pro Football Talk, Hankerson has been released by the Patriots.

The fifth-year wideout had a fairly promising start to his time with the Falcons in 2015. An injury caused him to land on IR, and the Falcons recently decided to release him.

Enter the receiver-needy Patriots, who scooped Hankerson up on waivers on December 17. Hankerson was active for Sunday’s game against the Titans. He played in the game, but he caught no passes and was targeted zero times.

The Patriots are paper thin at the wide receiver position so this tells me that either Hankerson is till not one hundred percent healthy or he has completely fallen off the map.

In a corresponding move the team promoted wide receiver Chris Harper from their practice squad.