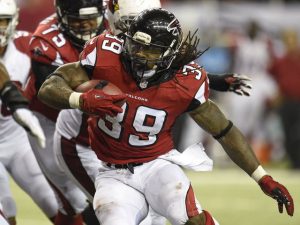 According to Josina Anderson of ESPN, the New England Patriots are signing RB Steven Jackson to a contract on Monday.

Jackson took to Twitter on Monday for the first time since September, posting a photo of himself working out accompanied by the caption, “I’m back.”

The New England Patriots, who have been ravaged by injuries at running back this season, will sign free agent Steven Jackson to a one-year deal.

Jackson, 32, met with the Patriots on Wednesday and worked out with the team the following day, sources told ESPN last week. He has not played in the NFL since being released by the Atlanta Falcons in February.

The New England Patriots officially announced the signing of veteran RB Steven Jackson on Tuesday, as well as the release of DL Ishmaa’ily Kitchen.