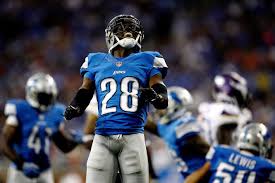 Lions free up a space by cutting Bill Bentley

Bentley, a third-round draft pick for the organization in 2012, had been previously released in June. The team brought him back last month after placing cornerback’s Josh Wilson and Rashean Mathis on season-ending injured reserve.

Bentley appeared in just two games during his brief return stint with Detroit, a total of 11 total defensive snaps.