Johnny Manziel might be in the dog house again after latest video; Coach is concerned 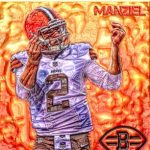 Will Johnny Manziel ever learn? This video was posted by busted coverage, and it shows Johnny Manziel holding a drink of some sort with a friend who is in fact drinking. The problem is his head coach is upset again….

“Anytime there’s something with our players that casts them potentially in a bad light, whether it’s Johnny or any of our other guys, it’s certainly a concern,” said Pettine, via Mary Kay Cabot of the Cleveland Plain Dealer. “I’m sure I’ll see it, I’ll have a discussion with him about it.”

After a video surfaced of Manziel partying during the team’s bye week, Pettine promised the “repercussions would be harsh” if Manziel messed up again.