Houston Texans lose QB T.J. Yates for the season with a torn ACL 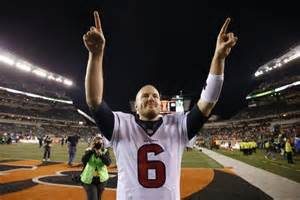 Texans lose T.J. Yates for the season with a torn ACL

The return of Brandon Weeden to the starting line-up may be occurring again. According to Ian Rapoport of NFL Media, the Houston Texans have lose quarterback T.J. Yates for the season.  According to Rapoport, Yates tore his ACL ending his season.

In the final two minutes of the first half of Sunday’s game against the Indianapolis Colts, Yates went down to the field and held his left knee. The injury occurred on a non-contact play. The quarterback was able to walk off the field, but was taken to the locker room.

The Texans confirmed that he would be out for the remainder of the game. Before exiting, Yates completed just six of 10 passes for 68 yards. Houston was already missing starting quarterback Brian Hoyer after he was ruled out for Sunday’s game to due a concussion he sustained in the Texans’ 27–6 loss against the Patriots. Hopefully Hoyer can return, but if he cannot the team will be looking at Brandon Weeden as their starter.