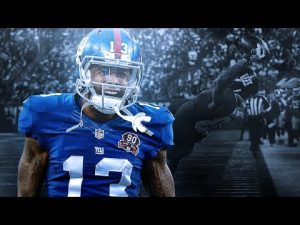 Yesterday, Josh Norman the Carolina Panthers defensive back was in the head of Odell Beckham Jr., and that caused OBJ to flip out and act like a fool.  Odell Beckham Jr. has yet to be disciplined by the NFL for his vicious helmet-to-helmet hit on Josh Norman of the Carolina Panthers and other actions during Sunday’s game, but Adam Schefter of ESPN is reporting that a one-game suspension is likely.

This morning on Twitter, Schefter said he spoke with multiple league sources about Beckham’s pending punishment

NFL discussing discipline for Odell Beckham Jr. this morning, but based on conversations with league sources, a 1-game suspension is likely.

This is similar to the Aqib Talib eye poke that happened earlier this year.  OBJ should get suspended for one game. I feel that is a fair punishment. Schefter also noted that Beckham had been fined by the NFL on multiple occasions, a history of discipline that will be taken into consideration.