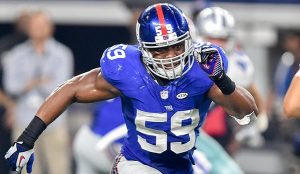 The New York Giants have placed linebacker Devon Kennard on injured reserve with a foot injury according to the Giants twitter account.  The Giants needed to free up a roster spot for Odell Beckham Jr. who was suspended last week.

The #Giants have placed LB Devon Kennard on Reserve/Injured with a foot injury.

Kennard, the Giants’ fifth-round pick out of USC in 2014, had missed the last four games with what were listed as hamstring and foot injuries on the Giants’ official injury reports. It was the foot injury, though, that was the main issue. Kennard has been wearing a walking boot for several weeks. Kennard is the 18th Giants player to be placed on IR this season.