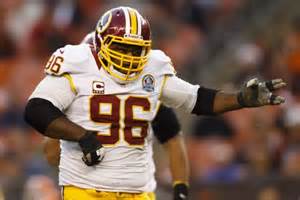 Cofield, 31, played five seasons with the Giants from 2006-2010, helping anchor the defensive line of the Super Bowl XLII champion. Cofield spent the last five years in Washington. He was released this off-season.

To make room for Cofield, the Giants released safety Brandon Meriweather, thinning their ranks at safety. Meriweather had started 11 games this season, stabilizing a position of concern for Big Blue after signing midway through training camp, but he’d missed two straight outings with a knee injury.