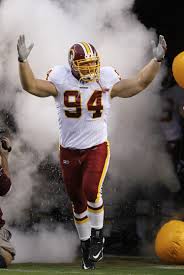 Adam Carriker has announced his retirement

Today Adam Carriker a former first-round pick of the Rams in 2007, announced his retirement on Facebook. Carriker’s career was derailed by recurring quad injuries. He has not played a snap since 2012 and was released by the Redskins in 2014. Carriker recorded nine sacks and 125 tackles across 65 career games.

“I’ve known for months I was done with football and I was going to retire. I just never announced it. But now is as good a time as any. As many people know, I participated in the Veteran Combine last spring. The feedback was very positive from about two dozen teams when they spoke with my agent, and we came really close to signing a contract.

I love football, and I don’t think people will question that, but I’ve reached a point where I’m proud of what I’ve done on the field. Anybody who knows me knows I have not and will not be bored since the day I decided to walk away a few months ago. I wasn’t going to sign a deal that I didn’t consider fair to my family and myself, and as a result, no deal was made. I said thanks, but no thanks, and wished them all good luck this season. They said the same. Although every player ultimately makes the decision to retire, and I played 8 memorable seasons in the NFL, the leg injuries I suffered with the Redskins got me to this day sooner in life than I should have.”