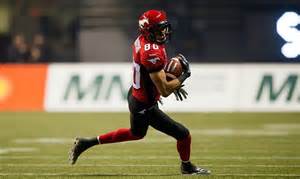 Eric Rogers is one of the best Canadian Football players in the CFL and he is now earning a shot in the NFL. According to Eliot Shorr-Parks of NJ.com, the Philadelphia Eagles held a private workout with Calgary Stampeders wideout Eric Rogers, who has drawn interest from 14 teams.

The former Cal Lutheran wide out was invited to the Dallas Cowboys but did not stick around. Rogers also spent time with the Arena Football League before heading North of the Border.