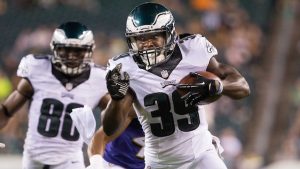 Philadelphia showed interest in the 5-8, 205 pound running back prior to the 2015 NFL Draft. He attended the Eagles’ local prospect workout day before also joining the team during rookie minicamp.

A four-year letterman at Villanova, Kevin Monangai appeared in 45 games for the Wildcats, finishing his career with 3,167 rushing yards and 29 touchdowns on 618 carries while adding 274 receving yards and five touchdowns on 38 career receptions.

A native of Roseland, New Jersey, he attended Seton Hall Prep in West Orange, New Jersey where he was named the county player of the year and second-team All-State after rushing for 2,266 yards and 35 touchdowns as a senior.