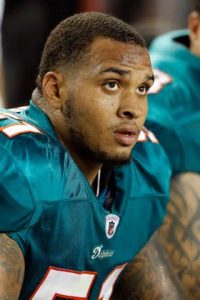 The Miami Dolphins are expected to lose their heart and soul on their offensive line. It is not like they are playing for anything at this point, but the team suffered two major injuries to their offensive line. Both Branden Albert and Mike Pouncey were injured, but according to Dan Campbell, Pouncey’s injury is worse and will keep him out for the rest of the season.

Pouncey left the stadium with his left foot stabilized in a boot. He is done for the season, although that is only two games. Coach Dan Campbell, asked if either Albert or Pouncey suffered season-ending injuries said Albert was better off than Pouncey.

Pouncey was taken to the locker room on a cart in the fourth quarter after suffering a foot injury.  He had his foot rolled up on and was unable to put any pressure on his leg. He suffered a foot injury last month, as well, but it’s not clear if it’s a re-injury or a new one.