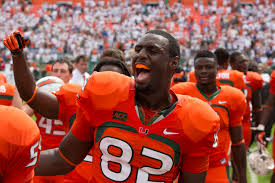 The New England Patriots had two of their former players claimed via the waiver wire today. Both Leonard Hankerson and Asante Cleveland were claimed. Hankerson went to the Bills and the Chargers claimed the Cleveland. Both were former University of Miami pass catchers.

The Patriots traded for him in August, but he was unfortunately unable to make the team’s 53-man roster coming out of the preseason. New England later promoted him close to a month ago be was waived this past weekend.

Chargers made several other roster moves as well: