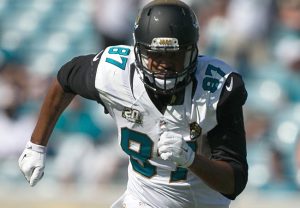 The Bills have signed Marcel Jensen to their practice squad

The Buffalo Bills signed Nick O’Leary to their 53 man roster and released Mike Mulligan.  Mulligan played this past week for the Bills and was a main reason why the Bills won.  It was his play that opened up the field for Charles Clay on the touchdown near the end of the game.

Well today the Bills filled O’Leary’s spot on the practice squad with another tight end. They signed Marcel Jensen, and to fill in the spot for Sammy Watkins brother who was signed by the Eagles earlier this week, the team signed Ronald Patrick.

Patrick originally entered the NFL in 2014 as an undrafted free agent with the Dallas Cowboys. In addition to Dallas, the 6-1, 310-pound South Carolina product has spent time with the Pittsburgh Steelers, Carolina Panthers and Cleveland Browns. Patrick started 25 career games during his collegiate career as a Gamecock.

Jensen originally entered the NFL in 2014 as an undrafted free agent with the Jacksonville Jaguars. In addition to Jacksonville, the 6-6, 270-pound Fresno State product has spent time with the Denver Broncos and Atlanta Falcons. Jensen appeared in one game for Jacksonville in 2014, catching one pass for eight yards. Jensen, 25, is a native of Fairfield, California.