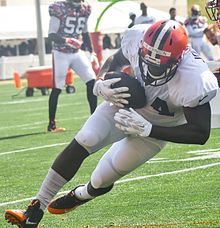 The Cleveland Browns on Tuesday re-signed OL Darrian Miller and placed FB Malcolm Johnson on season-ending injured reserve with a groin injury. He formerly played college football for Mississippi State as a tight end. By the end of his college career, Johnson had played in 45 games, 23 of them as a starter. He caught a total of 79 passes for 1,148 yards (1,050 m) and 10 touchdowns.

In a corresponding move the Browns signed Darrian Miller. He played college football at Kentucky. He was originally signed as an undrafted free agent by the Cleveland Browns.