Browns have claimed running back Raheem Mostert off waivers 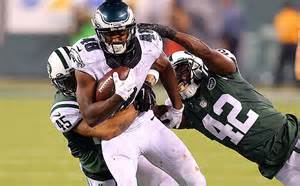 Browns have added running back Raheem Mostert to their active roster

Today the Cleveland Browns added the preseason rushing leader to their active roster. Raheem Mostert the former Eagles running back in the preseason was added via the waiver wire by the Browns.  Yesterday the Ravens released the former undrafted back.

The Browns released Darius Jennings to make room for Mostert. A 5-10, 197-pound rookie from Purdue, Mostert originally signed with Philadelphia as an undrafted free agent. After spending Week 1 on the Eagles’ practice squad, he has appeared in eight NFL games – one with the Dolphins and seven with the Ravens. Mostert is averaging 31.6 yards per kickoff return (221 yards on seven attempts) this season after setting a program record with 2,289 career kickoff return yards during his four years with the Boilermakers.