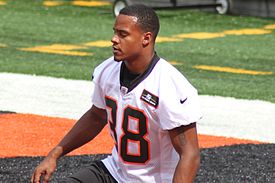 In 2015, Bruton appeared in 13 games and recorded 47 tackles, one sack, two interceptions, a forced fumble, a recovery and seven pass defenses.

Prater last played for the Minnesota Vikings, playing seven defensive snaps and two on special teams in their 23-20 loss at Arizona on Dec. 10. He was waived four days later.

The four-year veteran had two stints with the Colts earlier this season — for four days, from Sept. 29 through Oct. 2, and again from Oct. 4-20. He played in one game for the Colts: a 27-20 win at Houston in which all 13 of his snaps were on special teams.

He has played in 21 games in his career, starting three — all of them with the Vikings in 2013. He broke into the league as a fifth-round pick of the Bengals in 2012, but spent his rookie season on injured reserve and never played a regular-season down for them.