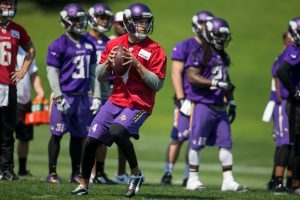 Mike Kafka has been signed to the Bengals practice squad

Today the Cincinnati Bengals had to sign a quarterback fast with all the quarterbacks getting hurt around the league. The team signed a player to their practice squad today, according to CincyJungle.com.

The team announced Tuesday that Mike Kafka had been signed to the practice squad. This gives the Bengals another arm in practice if AJ McCarron can’t practice or is limited in practice this week. McCarron suffered a sprained wrist during Monday’s loss to the Denver Broncos that reportedly shouldn’t keep him out this Sunday. But, to make sure there are enough arms throwing passes to receivers this week in practice, Kafka will likely get some practice reps and could even be an emergency quarterback in Week 17 against the Baltimore Ravens.

Kafka, now in what’s officially his fourth NFL season, has bounced around the league since being a fourth-round pick (No. 122 overall) out of Northwestern in 2010 by way of the Philadelphia Eagles.