Bears practice squad receiver has been suspended for 10 games 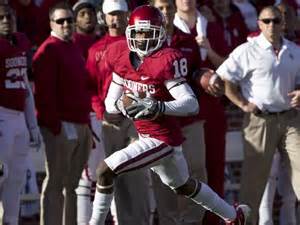 Former Oklahoma wide out Jalen Saunders is in the dog house again.

Saunders, 22, is a former fourth-round pick of the Jets back in 2014. Since entering the league, Saunders has already played for six teams, so his career hasn’t gotten off to a great start.

The Bears signed Saunders to the practice squad on Sept. 7 and transferred him to the practice squad/injured list on Oct. 6. The New York Jets drafted him in the fourth round out of Oklahoma last year and he was released just one month into the season. He then spent time with the Arizona Cardinals, Seattle Seahawks and New Orleans Saints before the season ended.

On Sept. 1, the Saints traded Saunders to the New England Patriots for a conditional draft pick but he was there only four days before joining the Bears, his sixth organization.

The 5-9, 165-pound Saunders is considered a good punt returner but he will have to sit out through Week 6 of the 2016 season before he’s eligible to play again unless the NFL reduces the suspension.