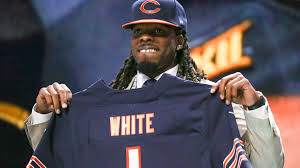 Kevin White of the Bears is done for the entire season

According to Dan Wiederer of the Chicago Tribune, the Bears are expected to place Kevin White on season-ending injured reserve next week, in lieu of adding him to the active roster.

The Chicago Bears have been hoping to activate Kevin White but that won’t happen after all.  The former first round pick will be placed on season ending injured reserve ending his season. White’s recovery from August surgery to repair a stress fracture in his left leg has progressed as the team had hoped, if not better. The young receiver has made marked improvement with his movement, shown signs of burst as his running has increased and worked through bouts of weakness in his left leg to gain more confidence in his acceleration and agility.

White, the No. 7 overall pick in last spring’s NFL draft, has been on the physically-unable-to-perform list since the season began. Officially, the Bears face a Tuesday deadline to activate White to the 53-man roster. The most likely scenario, however, is that he will retain his PUP status and go back to working through his recovery off to the side with the Bears’ trainer and strength and conditioning coaches.