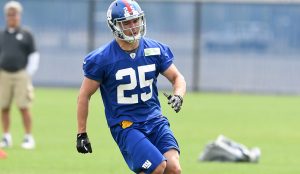 Former Dayton defensive back Kyle Sebetic worked out with the 49ers

According to Aaron Wilson of the National Football Post the San Francisco 49ers tried out two players on Monday including DB Kyle Sebetic and OL Colin Kelly.

Sebetic, a 6-foot, 197-pound first-year player out of the University of Dayton, was originally signed by the New York Giants on June 3, 2014. He was released by the Giants on Aug. 26, 2014, and spent a week on their practice squad in November. Sebetic was a four-year starter at Dayton and was named first team All-Pioneer League as a senior.

Kelly, 24, is listed at 6 feet 5 and 298 pounds. He signed with the team as an undrafted free agent out of Oregon State in May 2013 but landed on the Chiefs injured reserve when he suffered a knee injury in July. He has since been released.

The team signed CB Kyle Sebetic after his workout.