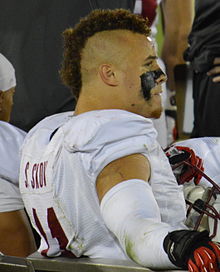 Skov was signed by the 49ers as an undrafted free agent in 2014. He played college football at Stanford.  In his final season, he went on to set a career high in tackles (109), tackles for loss (13), sacks (5.5) and forced fumbles (3). He was named a third team All-American by the Associated Press.