Two Carolina Panthers get hit with a suspension by the NFL 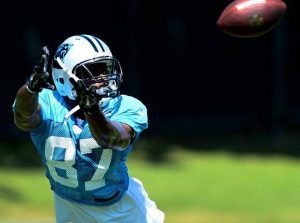 Panthers wide receiver Stephen Hill will serve a one game suspension for his citation in July.

The Carolina Panthers are 10-0 and I do not see them slowing down anytime soon.  Well the NFL ran some suspensions yesterday and two Panthers were hit. Carolina Panthers defensive end Wes Horton has been suspended four games after testing positive for a performance-enhancing substance.

Horton’s suspension begins immediately. He will be eligible to return following the team’s Dec. 20 game against the New York Giants.

Horton is not a starter and will see little time anyway with Charles Johnson returning. In addition to Horton, wide receiver Stephen Hill was also suspended one game. Hill’s suspension stems from a July incident in which he was stopped and cited for possession of marijuana, according to ESPN.

Hill, who is on injured reserve, will also serve his suspension immediately. The Panthers placed Hill on IR after he suffered season-ending knee injury in training camp.