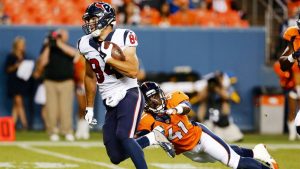 Texans tight end Ryan Griffin, who has been out since spraining his medial collateral ligament Week 1, was activated from short-term injured reserve on Sunday in advance of Houston’s Monday night game against the Cincinnati Bengals.

In a corresponding more, the Texans announced the release backup offensive lineman Eric Kush to make room for Griffin.

This move was an amazing one because Griffin came up in a big way for T.J. Yates and the Texans.  Griffin’s return once again gives Houston three tight ends on the roster. The three-year veteran will provide depth behind Garrett Graham and C.J. Fiedorowicz.