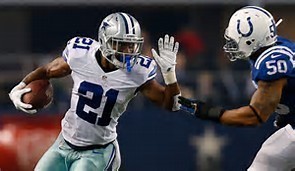 Wow in a shocker, the Dallas Cowboys just released running back Joseph Randle. This news is a huge surprise. The Cowboys are thin at the running back position, but wow what a turn of events. Randle was once considered their starting back.

**breaking news*** The Joseph Randle saga is over in Dallas. He has been released by the Cowboys per sources

At a time when the Cowboys are growing increasingly concerned about Joseph Randle, the Dallas running back is facing discipline for violating the NFL’s personal conduct policy. He is now released, according to Clarence Hill of ESPN.

Randle met with NFL investigators this summer and again within the past week, and the NFL determined that he violated the league’s personal conduct policy, which will carry consequences. In a best-case scenario, Randle will be fined. More likely, he’ll be suspended, possibly for multiple games, for a February incident in Wichita, Kansas, in which Randle was arrested for unlawful possession of marijuana after police received a call about domestic violence with a weapon after an incident with Randle and the mother of his son.