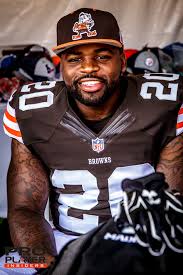 Former Towson running back Terrance West, who was a target for the Ravens coming out of college in 2014 but has struggled to make an impact in two NFL stops, announced on social media that he’s joining the Ravens. West will be on the team’s practice squad.

On his Instagram account, West posted a picture of the Ravens logo. In an extended caption, he wrote: “God took me around the world to bang me up so I could appreciate it more being home. Ima [sic] give you guys my all. I love my city. Dreams into reality!”

He split time with undrafted rookie Isaiah Crowell in 2014, rushing for 673 yards and four touchdowns, plus one receiving touchdown in 14 games. Cleveland traded him to Tennessee before the 2015 season, and he had 16 carries for 51 yards before he was released Saturday.

In a corresponding move the Ravens released Nordly Capi from their PS.