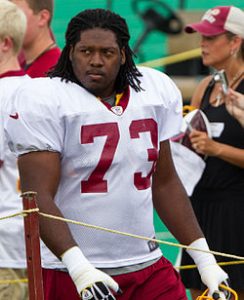 According to Aaron Wilson of the National Football Post the Oakland Raiders worked out OL Adam Gettis on Monday.

was drafted by the Washington Redskins in the fifth round, with the 141st overall pick, of the 2012 NFL Draft. He played college football for the University of Iowa.

He spent just over two years in Washington before he was waived at the start of the 2014 season. Gettis later caught on with the Steelers for a brief period of time before signing on to the Giants’ practice squad. Gettis has played for three different teams since entering the NFL.