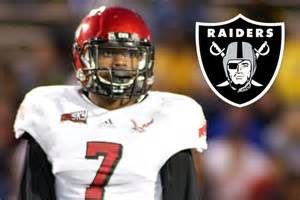 The Oakland Raiders officially waived DB Tevin McDonald on Thursday, according to the NFL transactions release.

McDonald, 23, signed on with the Raiders as an undrafted free agent out of Eastern Washington shortly after this year’s draft. Played at UCLA from 2010 to 2013 when he was dismissed by Jim Mora for an off the field incident. Redshirted for 2010, then went on to play in 2011 and 2012 for UCLA. Was a freshman All-American in 2011. In 2012 he ranked third on the team in tackles with 79. Played for the Eastern Washington team for the 2013 and 2014 seasons. Finished his senior year with 78 tackles and 3 interceptions.

His Father is Tim McDonald the defensive backs coach of the Buffalo Bills and his brother is T.J. McDonald of the St. Louis Rams.