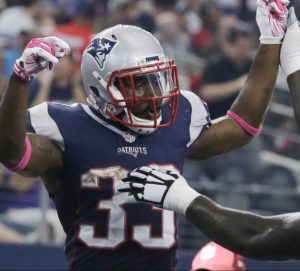 Patriots running back Dion Lewis is lost for the season

Jim McBride of the Boston Globe, is reporting that New England Patriots running back Dion Lewis is out for the season with torn ACL.

Last night Adam Schefter of ESPN announced that Lewis had a loose ACL, but there was no swelling. Well Lewis had to undergo an MRI today and according to McBride of the Boston Globe it is in fact torn.

New England Patriots running back Dion Lewis left Sunday’s game against the Washington Redskins in the third quarter with a knee injury and did not return.

Before leaving, Lewis recorded 14 yards on four carries and caught four passes for 39 yards. He entered the game with 569 all-purpose yards in six games.