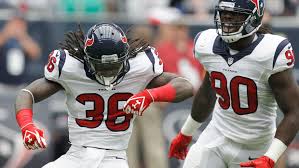 Packers worked out former 2nd round pick of the Texans.

Ian Rapoport of NFL Media reports that the Packers brought in free agent S D.J. Swearinger for a visit on Monday. This is an interesting move considering the Packers usually do not work out notable free agents.

Micah Hyde left Sunday’s game with a hip injury, so Green Bay could be looking for some more help at the position.

Swearinger was drafted by the Houston Texans in the second round of the 2013 NFL Draft. He played college football at South Carolina.

Swearinger was recently released by the Tampa Bay Buccaneers after being claimed by them via the wavier wire.  The Texans drafted him with the 57th overall pick, and waived him after a horrible couple seasons with them.