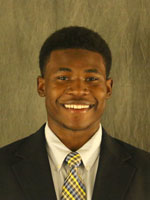 NAU WR Emmanuel Butler is one to remember #STUD

Emmanuel Butler the Sophomore wide out from Northern Arizona University is making a name for himself in the FCS. The 6’3, 215 pound wide out is already dominating the FCS conference. Butler is the leading receiver of the Lumberjacks this season and already has 50 receptions for 976 yards and 14 touchdowns. He will be a guy that NFL teams fall in love with and I would not be surprised to see him as a finalist for the Walter Payton Award this year.  We had a nice interview with the Sophomore from NAU, to find out a little more about him as a player.

The coolest thing that I have done off of the field is help out at football camps. I love helping kids and sharing what I know about the game of football.

The hardest college class that I have had to take was BIO 181. Since day one in that class I knew science was not for me.

I am from Phoenix, Arizona.

My role model is LeBron James. He grew up less fortunate than many people and continued to work hard and become the best. I also admire the fact that he is the greatest basketball player on earth yet he continues to work like he is the worst.

Growing up I played both football and basketball.

I played defensive tackle my very first year of football and then I played quarterback up until high school. My freshman year of high school I played safety, corner, and running back, and then my sophomore through senior season I played tight end.

What separates me from other people at my position is my size and my ball skills. I feel that I have the best ball skills in all of college football and if you throw it to me I am going to come down with the catch.

When I am breaking down film I look for the tendencies and the coverages of the defense. I also break down the techniques used by the players in the secondary and figure out what I need to do in order to win my match-ups.

If I could compare my play to one player in the NFL it would be Julio Jones because we are both big wide outs that can create match-up problems with size and physicality. However he can still get open with his route running and speed.

The biggest obstacle in my life that I have had to overcome would be growing up. I went to a school in a nice neighborhood however I lived in south Phoenix where things were not always as nice. There was gang violence, drugs, etc and there were periods of time when my mom may have not had enough money to get us everything we wanted. However, she always found a way to make it work and made sure we had everything we needed.

Before every game I make sure I give thanks to God for blessing me with the ability and the opportunity to be able to play the game I love.

As a small school football player I feel that I am sometimes overlooked. I know that I am a top receiver at the college level including FBS. Therefore I have to take advantage of every opportunity and do more than every other wideout in the country.

My biggest strength are my hands and my physicality.

My biggest weakness is relying too much on my athletic ability and not paying as much attention to the details of the game. Many times I get away with it and I am able to still make the play because I am a good athlete. However it is something that I have been working on and this off season the little details that it takes to become a great receiver are my main focus.

My favorite NFL team growing up and my favorite team to this day are the Philadelphia Eagles.

If I could have dinner with three people dead or alive I would choose Deion Sanders, Julio Jones, and Michael Irvin