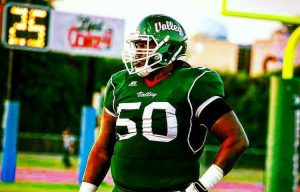 The coolest thing I have done off the field was go back to the local schools not too far from the campus and talk to the students about the importance of getting a good education and I also go back to my high school and workout with the football team and basketball team.

I am from Uniondale, NY

My role model has to be my Father simply because he basically raised me on his own even when times got hard and we didn’t have certain things he always made sure we had a house to sleep in and always food on the table. The sacrifices he made for me plays a key role in my success today.

Other than football I played basketball, Track and field, and lacrosse.

In high school I played defensive tackle, Defensive end, and even a little bit of middle linebacker.

The thing that I believe separates me from other athletes at my position is first and foremost my passion and love for the game simply because I know without this sport I don’t know where I would have been. It has taught me not only about myself but also about life. So when its game time I feel like every time I suit up I have to win my personal battle with the man in front of me because I know how much I owe this game.

Believe it or not I look for my opponents strengths and the reason being is because I know as an offensive linemen I know if I can stop that than they have no choice but to play with their weakness.

The toughest player I can say I face is myself because know player has ever just beaten me because of their strength and speed, but only because the little mistakes I have that cause someone to beat me.

I really can compare myself to Marshal Yanda the offensive linemen from the Baltimore Ravens because of his aggressive play and good footwork. 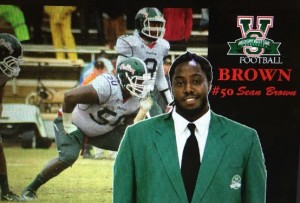 My biggest Obstacle in my life that I had to overcome was watching my Father struggle not only with raising me but with being sick and on dialysis for over 15 years. Honestly football having a strong mindset to never quit at anything I do because my Father never quit on me.

Only giving praise to the glory of god and thanking him for allowing me to do something I love to do.

Sometimes I can be over aggressive on the field.

I would say that I’m needed on this team because I know my leadership skills, my passion, and drive will not only better myself but my teammates around me to win championships.

My favorite player growing up had to be Mike Vick and my favorite team had to be either the Giants or the Jets.

First my Grandmother who past when I was younger, Jerry Jones, and LeBron James

With my first NFL check I would just save it in order to help my Father out with his situations.