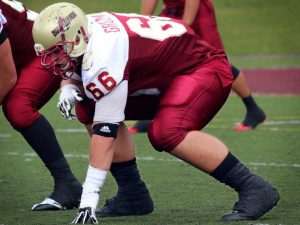 Volunteering at a local elementary school here in Montreal at a flag football tournament that was hosted by the Montreal police department. It was great seeing the passion that the kids had for football.

I was born in Tel-Aviv, Israel. But I moved to Toronto, Ontario when I was 10 years old.

My parents, they were immigrants in two different countries and I got to see them go from having nothing to being able to support me and my younger sister simply by working hard and not complaining.

I played basketball and soccer since I was 6 years old. And I played rugby in high school.

Anywhere on the offensive line, and I’ve played defensive line as well in high school

I believe my lateral quickness when trying to mirror defenders is good. I also pride myself in being a student of the game, this helps me see plays before they happen and predict where D-lineman and linebackers are going to end up and taking the proper angles to them.

Tendencies within the D-lineman, whether they change their stances at all when they stunt or drop back into coverage. Their go-to move, and how they like to execute it and at what times.

David Menard who plays for the BC Lions now.

I would have to choose Branden Scherff from the Washington Redskins. We have similar build, he can play both tackle and guard. He plays with a controlled aggressive demeanor, and I believe we play similarly. 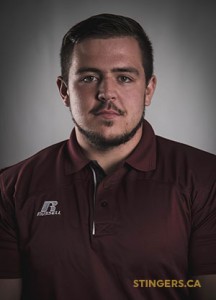 Learning English and adjusting to life in Canada when I first immigrated here when I was 10 years old. I came from a country that was at war for the entire time I was there where it was dangerous to go anywhere.

Yes, before every game I have to listen to both the Israeli and Soviet Union national anthems. It reminds me where I come from, and what/who I am playing for.

The biggest obstacle for me is not having the same exposure in Canada as a big time division 1 school in the states would have. It just means I have to work a lot harder than a player from the states.

Physically, my lateral quickness. On the mental side, my knowledge of the game helps me a lot. Having played in Canada and the U.S under different types of coaching styles and offensive schemes.

Football is my life, I love both the mental and physical aspects of the game. My favorite feeling is when I dominate the man in front of me. I am all about the team and I am willing to do anything to help the team win games.

Growing up my favorite player was Jake Long. He had incredible technique and unbelievably fast feet.

My great grandfather who survived World War 2 and was a war hero. David Ben-Gurion the founder of Israel Yossi Benayoun Israeli soccer player.

I would give a large part of it to my parents so they can help pay for my sister’s university tuition, and try to put a large amount of it into savings.