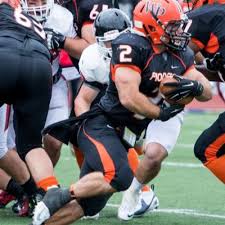 I work with youth football players at camps, as well as train a bunch of younger athletes, and it’s really enjoyable to see how much they appreciate my advice. Seeing that I can have a positive impact on someone else’s athletic career is just as gratifying as helping my own career.

Both of my parents because they both work extremely hard in their own way and take care of my siblings and I.

I played OLB and SS in High School

My combination of being able to run inside & outside, catch passes, and block as well as my toughness to do whatever it takes 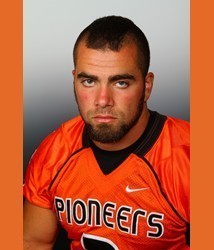 I watch myself to see what mistakes I made and where I can improve. I look for physical issues that I can improve in training as well as skill/technique issues that I can work on in practice. When watching other defenses I look at how each position & player tends to react to certain reads and plays so I can get an idea of how they will react to my team.

It is really hard to choose just one player. I have faced a lot of really good football players, and some that have gone on to play in the NFL, but ultimately after a game the defense as a whole is what I remember.

He isn’t on a team anymore, but I would have to say Ray Rice. We are both built similarly with speed and quickness, and are a receiving threat, but also have the ability and willingness to run inside and pass protect

I struggled with my decision on where to play after high school, and bounced around schools. Throughout that time I had many thoughts about no longer playing but I always remembered how much I loved the game. I trusted in hard work and knew that if I continued to give everything I had things would work out.

I can play every down and do everything a RB needs to do; Run, catch, fake, pass block, run block.

Preferring to run someone over instead of you using my speed

I would tell them that they are getting someone who refuses to be outworked and they will not find a tougher player. I am willing to do whatever it takes on and off the field to be successful and have the skill set to do whatever it necessary whether it is on offense or special teams.

A vacation for my parents to any destination they want