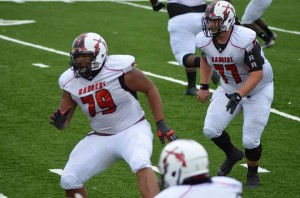 I play at Northwestern Oklahoma University

The coolest thing I would have to say is speaking to high school kids in Fresno, California for the Fellowship of Christian Athletes.

My oldest brother he had many trials and tribulations when he was young but he was a leader and great provider for family.

No other sports, I was dedicated to perfecting my craft in football.

Offensive Tackle this was my first season ever at offensive guard.

What separates me from other guards is that I played tackle so I am very patient with my set so its easier for me to look up at a defender.

The toughest player I’ve faced hands down would be my teammate Joby St.Fleur. I played against some good players throughout my career so far, but he is more talented.

I would have to say Amini Silatolu Guard for the Carolina Panthers he is athletic and physical. I was getting recruited out of Junior College to replace him once he left Midwestern University.

The biggest obstacle I faced was my father passing away this year with his battle with prostate cancer 17 days after my 23rd birthday. My coach Matt Walter and the support from my teammates,and family which helped me stay strong.

My pre-game ritual is I call my oldest brother and sister in law every game to pray for me before I go out on the field I been doing that since I was in junior college.

The thing I feel that I have to overcome is the misconception that since I came from a small university that I haven’t played against good quality players on a constant basis. 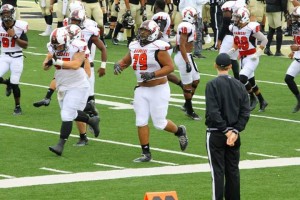 My aggressiveness and physicality and being coachable.

Stop my feet at times on my pass protection.

I would tell you that I am a hardworking individual who just wants a chance to separate myself from others and in order to call myself the best playing against the best.

Tom Brady and The Patriots

With my first check depending on how much it is I would buy my high school a new weight room then buy my mother a house.