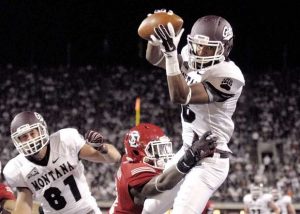 Played piano at a retirement home. It wasn’t while I was in college but definitely something that has stuck with me.

Probably business econ while I was at UW. I didn’t have great study habits coming into college and found out the hard way it takes more than coming to class to pass.

I would say my parents. They have made a lot out of a little and it’s taught me that if put full effort into anything that I’m doing good things will happen.

My first year playing football I played nose guard and O-line (5th grade). Eventually I found my way to running back, corner, and wide receiver.

My route running and ball skills separates me from others. I see a lot of receivers that let the ball get into their body and some that rely on their physical gifts to get open but that’s not the staple of my game.

I’ll watch DB’s and I’ll look for their tendencies and how patient they are, how fast do they turn their hips, are they physical? I know the more patient a corner is, the more I have to sell a certain direction to get a clean release.

Desmond Trufant. He’s extremely patient and quick which makes it hard to get off the line when he presses. I learned a lot watching him.
If you could compare your play to one player in the NFL who would it be and why?

I would say Keenan Allen because of our emphasis on technique and route running. He’s a very clean route runner and doesn’t always rely on his physical gifts to get open. I try to be the same way.

Transferring from UW. I had to be sure of my abilities, because ultimately I was taking a risk. I was and so far it has been a blessing.

No I just try to stay as relaxed as possible. 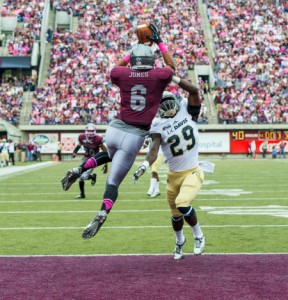 I am not a liability.

My favorite player growing up was The Bus. Only running back I have ever seen to run over Brain Urlacher .

When I was young I used to lean back in the chairs at our dinner table and they’d always break. My mom said that when I get to the NFL I’d have to buy her a new table set, so I would buy that.