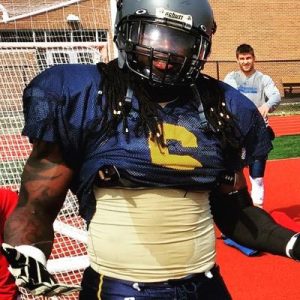 I am in pretty good shape, I am 245 pounds and still run in the 4.5’s. My body is in the best shape ever, because I am in my “Grown Man” body. – Dwayne Beckford

The hardest class I have taken is easily this Theology class I am currently enrolled in. It is very hard

My role model is my Dad he has always been there for me no matter what. All he does is work, work, work. He is the most selfless person I ever been around when it’s all said in done I want to be able to say I did everything in my power to help my family just like him

I played basketball years before I played football. I always thought I was a ball player I could jump high and dunk since middle school

I played TE my senior year in high school and I was pretty good I had a game were I finished with 128 yards.

At my current position I think what separates me is I have a unique combination of speed and power I can bench 450lbs and I can run a forty in the 4.5 range

When I break down film I focus on the offensive tackles. I try to watch there footwork (if their a jump setter, quick setter, if the like to lunge grab and whether or not if they can handle movement well). Also I try to focus on what plays they like in specific situations like 1st and 10 and short yardage situation as well as the red zone

The toughest player I ever faced was Russell Wilson. I have played a lot of good players but I think he had to be the best. He wasn’t very big at all but he made some amazing throws . He had very good speed for a QB. I remember one play were he rolled out to the right and through a wheel right across his body to the left for about 50 yards. It was a great ball

I would compare myself to Von Miller although he is a bit taller than me I think we share some of the quickness and speed off the edge. I really watch a lot of his highlights trying to shape my moves to be similar to his as I develop as a pass rusher 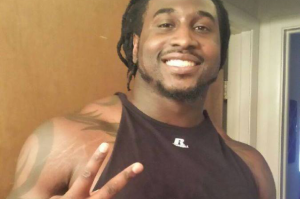 Dwayne Beckford was one of the best linebackers in the country, but ran into several problems causing his dream to be put on hold

The Biggest obstacle I overcome was getting back into school and being eligible to play football. First I had to get my transcript released from Purdue which was thousands of dollars of which I didn’t have when I finally got my transcript I had to take 24 credit hours from spring and the summer semester to be eligible. NAIA eligibility rules are much different. This was also extremely difficult but I end up getting it done and back on the field. With the help from my family and my coaches it was possible.

Pre game I have to eat peanut butter and honey before every game it gives me the juice!!

I would sell myself on what I been through in my life has more than prepared me to be a NFL player there were days when I didn’t  know where I was going to live or sleep as well as nights and jail were I could see my whole life just pass bye. I would have flash backs of letting my whole family down again and again. I prevailed from those situations. This will be another

My favorite player growing up was Edgerrin James I grew dreads because of The Edge.

I would have dinner with Sean Taylor, Raphael from the Ninja Turtles and Wesley Snipes as Blade