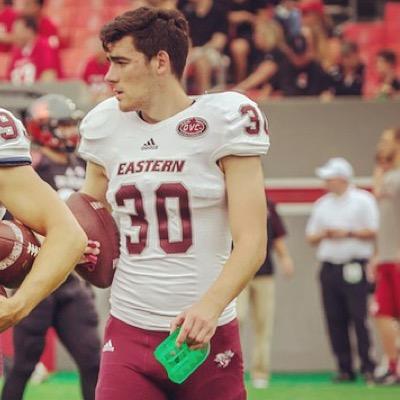 During the summers I volunteer at local soccer. I love working with kids, putting a smile on their face and educating them on the game of soccer.

The hardest class I took was Elements of Statistics – ECN 279. I took this course during my four years of undergraduate at Baldwin Wallace University.

I was born and lived in Newcastle, England the first nine years of my life. I moved to Maryland for a couple years and then moved to Richfield, Ohio. Richfield is located right in between Akron and Cleveland. Fun fact – My parents’ home is only ten minutes away from Lebron James’ house.

I have played soccer my whole life. I played high school and club soccer. I eventually went on to play collegiate soccer for four years at Baldwin Wallace University in Berea, OH.

I have only been a kicker. This year at Eastern Kentucky is only my second year of football. My first year playing football was during my senior year of high school. After only one year of high school football I had preferred walk on offers from Akron and Eastern Michigan. I decided to continue to play soccer instead. I loved the game too much to give it up at that time.

I believe I am quite a raw talent and I have a huge upside. I believe my kickoffs separate me from other kickers in the nation. I am very confident in my kickoffs and believe I can kickoff as well as anyone in the nation. On 31 deep kickoffs I have 24 touchbacks. That’s a 77% touchback rate. What will also separate me is the amount of work I am going to put into perfecting my accuracy on field goals. After the season I am going to train with my kicking coaches. Hopefully I can showcase my field goal ability at a senior showcase bowl game.

I watch film from every practice and game at Eastern Kentucky. I look for consistency in my approach and how I strike the football. 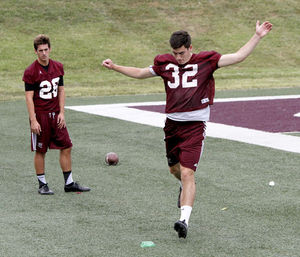 I haven’t had to overcome many big obstacles in my life. I think one of the biggest obstacles is about to take place. I believe not kicking a field goal in a collegiate game and wanting to kick field goals in the NFL is a massive obstacle in which I am going to have to overcome. I am going to train with some of the nations best kicking coaches. I am also going to go to combines and compete with some of the best talent out there. I am even willing to start my career in the arena league or the CFL. Any opportunity would be greatly appreciated.

As a small school football player what obstacles do you feel you have to overcome? / What is your biggest weakness?

The biggest obstacle I need to overcome is proving to NFL teams I have the ability to hit field goals. I am going to finish my only season of collegiate football attempting zero field goals. I need to prove that I am more of an asset than just a kickoff specialist. With hard work and training I fully believe I will kick field goals in the National Football League one day.

I believe my biggest strength is my leg power. Some things you cant really teach, such as leg power. I also believe I am very coachable. I can’t go a day without thinking about making it in professional football. My motivation couldn’t be higher and that strives me everyday to get better. I am embracing the process and look forward to the grind of training.

If our team is down two points with a couple seconds remaining I want the game to come down to my leg. I like pressure and always have. I thrive in pressure situations and I love to compete. I would love and greatly appreciate the opportunity of showcasing my talents at a NFL rookie mini camp.

When I first moved to the United States I liked the Baltimore Ravens. After living close to Cleveland since 7th grade I am now a Cleveland Browns fan.

I would probably have dinner with Justin Tucker, Steven Hauschka and Phil Dawson. I would ask them many questions about kicking. These three kickers are some of the best in the business.

I would take my parents to a nice steakhouse restaurant where they can get a nice filet mignon and a glass of wine. I look forward to the day we can go for a nice dinner and I can pay the check. They have done and sacrificed a lot for me to be at Eastern Kentucky playing football. I owe them everything.