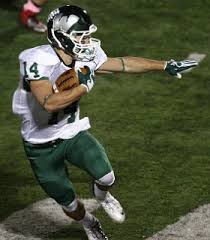 Every fall camp I have been fortunate to work with The Baby Fold of Bloomington, who are a non-profit agency for children with special needs. They attended a couple of our practices and we were able to show the kids drills and teach them how to play football. It was great being able to give back to these kids and bring them joy through the game of football.

Both my mother and father. They have shaped me into the man I am today and instilled values that have given me opportunities and the ability to achieve success throughout my life. 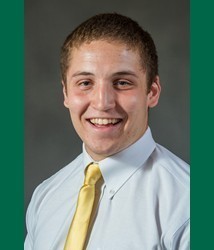 I played basketball and baseball growing up as a kid and also was a swimmer in high school.

I played running back growing up in pee wee football and also played corner back in high school.

My break away speed, hands, blocking and passion for the game of football. I’m also a good listener and a very coachable player. Also my versatility as a football player. I can play receiver anywhere on the field, also I return punts and kicks along with playing gunner on punt and kickoff team.

I start by looking for tendencies throughout the defense. I look to see how the defensive backs show or disguise their coverages and how the linebackers show or disguise their blitzes. Then I will breakdown each individual player in the secondary and how they react in certain situations. Also I will study their individual style of play whether it is their physicality or the different techniques used when they press or get off blocks.

I would compare my playing style to Antonio Brown. He is a very dynamic receiver who possesses break away speed and has tremendous big play making ability. He also runs crisp, fluid routes and plays the game with great passion and tenacity.

During the first week of fall camp freshman year of college I had a very close uncle pass away. He was a mentor to me in life and in the game of football. It was a trying time for me and my family but taking the lessons that I had learned from him to push myself each and everyday to get better in life and in football and the support for my family and friends I was able to come back a stronger man and football player.

I have a certain warm up and stretch routine I do prior to taking the field  that I have done since high school. It consists of various dynamic and static stretches, and foam rolling out the entire lower half of my body.

My break away speed, big play making ability, and hands. Having a mind for the game of football whether it is breaking down film or reading a secondary in a game time situation.  I pride myself in having a tenacious work ethic that I bring to every task I encounter on a daily basis.

My biggest weakness would be being to much of a perfectionist. I tend to get on myself hard when I make a mistake whether its on the field or in the classroom, but I work to get better at being patient when making a mistake and learning from my mistakes.

You will not find a guy who plays with more effort or passion or who enjoys the process of preparation whether it is working out, watching film or practicing as much as I do. Although I come from a smaller school I have the skill set to be a highly productive and versatile football player at the next level. When the game is on the line and a play needs to be made I want the ball in my hands. A guy may have more experience than me but I will never be out worked.

My favorite player growing up was Jerry Rice, although he came from a smaller college he became one of the best receivers to ever play the game. Being from the Chicagoland area I have always been a Bears fan.

I would help my parents prepare themselves for retirement. They have done everything in their power to make sure I had the opportunity to be successful in life, I want to give back to them and take care of the two people who have made me into the man I am today.