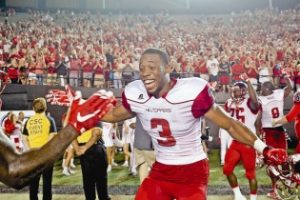 Helped my coaches teach and run some camps that were being held at the university. Enjoyed myself coaching up some young high school talent.

I would say Western Civilization

My role model I would have to say is Antonio Brown, a guy like that who has the patience with his family after all he’s had to persevered with throughout his life. The way he uses that pain as motivation and be a better father for his son it’s just refreshing knowing it’s other fathers, brothers, sons, etc. in this world that put others first no matter what.

I played soccer primarily and was on and off with baseball. Was one to always think basketball was easy and for girls, I then put the pads on for the first time took a couple hits but fell in love with it from day 1.

Yea I played Corner, Safety, and Running Back

I would have to say my knowledge of the game and the rapid understanding of grasping the concept of the playbooks. Just understanding what my offenses is trying to accomplish is something I relate to very well.

Cornerback tendencies, for instance how soon a cornerback opens his backpedal or how he may play the ball while it’s in the air. Understanding if I have to make sure I snatch the ball out of the air and tucking it into my hip because he may be a corner that is exceptional with playing a receiver’s hands. 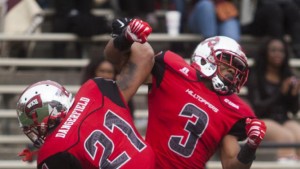 I would have to go as far back to my freshman year in Junior College. We made it to a bowl game and I played a Cornerback that ended up playing for Kentucky. He was technically sound and made sure I worked for everything I got.

I would have to compare myself to a Michael Crabtree or Jeremy Maclin. The way I can use my body against smaller defenders and again the knowledge of the game they both possess is something I can relate to.

The biggest obstacle I had to overcome is not graduating high school and not playing football at one point in my life. I overcame that by going and earning my GED and doing what I had to do taking the JUCO route.

Showing GM’s and scouts that I can play with the best of the best and also showing them that I’m more than a system guy, not one dimensional, can be utilized in multiple ways, and can move well with my size.

My biggest strength would have to be my strength. Love the weight room!

I would have to say my flexibility.

I would say that I’m a very passionate guy. My work- ethic is very hard to compare and I am very self- driven when it comes to something I want. Love playing this game regardless if my team is successful or not, although it is a bonus if we are but all in all it’s about not being selfish and I’ll contribute in any way possible putting the team’s goals before my own.

Barack Obama/ Lebron James/ & My son if he was at an age where he could remember and ask any questions he wanted to. He currently only 1

I would have to say a car for me, a car for my mom, and a place for me and my son to live.