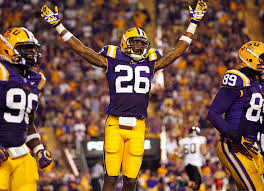 The New York Jets announced the signing of S Ronald Martin to their practice squad. Martin played college football at LSU. He was a starter at safety with Tremendous instincts to find the ball in coverage. He started eight times and played in 24 games during his career, had 76 tackles, six pass breakups and three interceptions in his career.

We have signed S Ronald Martin to the practice squad.

Martin signed with the Seahawks as an undrafted free agent out of shortly after this year’s draft. However, he waived during roster cuts and later claimed by the Jets.