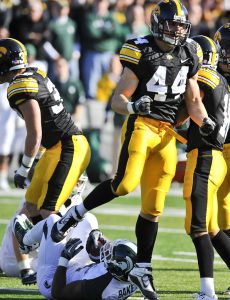 The New York Giants have re-signed second-year linebacker James Morris to their practice squad, as well as defensive back Tramain Jacobs.

Morris initially was signed to the practice squad on Sept. 15, and was promoted on Oct. 31 prior to the Giants’ 52-49 loss to the Saints in New Orleans.  Morris was an undrafted free agent out of Iowa who spent his rookie season on the Patriots’ injured reserve.

Jacobs first enrolled at Mississippi Gulf Coast Community College before transferring to Texas A&M University. He attended Covington High School in Covington, Louisiana. Jacobs has also been a member of the Baltimore Ravens.

The signing of Morris and Jacobs puts the New York Giants practice squad roster at 10.