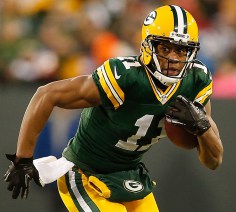 Jarrett Boykin worked out for the Jets today

Today the New York Jets worked out several wide outs to include Jarrett Boykin.  Boykin was signed by the Jacksonville Jaguars as an undrafted free agent in 2012, and has also played for the Green Bay Packers. He played college football at Virginia Tech.

After playing college football for the Tulsa Golden Hurricane, Damaris Johnson was signed by the Philadelphia Eagles as an undrafted free agent in 2012.

Robinson was selected in the sixth round of the 2011 NFL Draft with the 178th pick by the Washington Redskins. He played college football at Southern Methodist University.

Salas was drafted by the St. Louis Rams in the fourth round of the 2011 NFL Draft. He played college football for University of Hawaii.