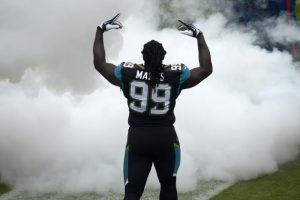 The Jaguars were able to pull off a huge win this week against the Ravens, but they lost a very key part of their defense. According to Jeff Darlington of NFL Media the Jaguars have officially ruled DT Sen’Derrick Marks out for the season, and are expected to place him on season-ending injured reserve by Thursday.

Marks suffered a torn triceps during their Week 10 game against the Ravens, so this shouldn’t come as a big surprise, even though he was seeking a second opinion.

Gus says losing Marks would be “tough.” Thought he was finally getting back to where he was before the knee injury. #Jaguars