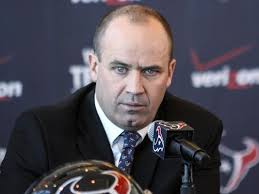 John McClain of the Houston Chronicle repeatedly has said on PFT Live on NBC Sports Radio that owner Bob McNair won’t fire O’Brien after the season. Bill O’Brien may decide to walk away though. According to  Jason La Canfora of CBS Sports Bill O’Brien is interested in the vacancy at the University of Maryland.

O’Brien worked for the Terrapins from 2003 through 2004, coaching the running backs.

LaCanfora also reported that Chargers OC Frank Reich is also interested in the Maryland job, and viewed as an “elite candidate.”